In his short book, How to Read Lacan (2007), Slavoj Žižek writes, as I’m sure he does in several other places,

According to the standard view, the dimension that is constitutive of subjectivity is that of phenomenal (self-)experience: I am a subject the moment I can say to myself: ‘No matter what unknown mechanism governs my acts, perceptions, and thoughts, nobody can take away from me what I am seeing and feeling right now.’ Say, when I am passionately in love, and a biochemist informs me that all my intense sentiments are just the result of biochemical processes in my body. I can answer by holding onto the appearance. ‘All that you’re saying may be true, but, nonetheless, nothing can take from me the intensity of the passion that I am experiencing now . . .’ Lacan’s point, however, is that the psychoanalyst is the one who, precisely, can take this away from the subject: the analyst’s ultimate aim is to deprive the subject of the very fundamental fantasy that regulates the universe of his (self-)experience. The Freudian subject of the unconscious emerges only when a key aspect of the subject’s (self-)experience (his fundamental fantasy) becomes inaccessible to him, primordially repressed. At its most radical, the unconscious is the inaccessible phenomenon, not the objective mechanisms that regulate my phenomenal experience. So, in contrast to the commonplace that we are dealing with a subject the moment an entity displays signs of inner life (of a phantasmatic experience that cannot be reduced to external behaviour), one should claim that what characterizes human subjectivity proper is, rather, the gap that separates the two, namely the fact that fantasy, at its most elementary, becomes inaccessible to the subject. It is this inaccessibility that makes the subject ’empty,’ as Lacan puts it. (53-54)

Psychoanalysis as secondary deprivation. Žižek’s point is confusing, but I think he’s claiming, on the one hand, the Lacanian principle that the subject is deprived of a “fundamental fantasy”—”the way things ‘really seem'”—from the very start (53). The I comes into existence, in other words, by way of a primordial and constitutive state of deprivation between an “empty” subjective form and a fantasy that comes from and remains outside (i.e., the fantasy does not fill the subject, does not truly become an “inner experience”). Marriage—understood as lifelong commitment—is a useful illustration of Lacan’s principle. From the moment a lover utters the vow or the promise to serve a beloved forever and always—till death do they part—she believes herself to have entered and to enjoy a lifelong love that is now the jewel of her life (as well as the life of her beloved). However, their love can only be “lifelong” once both parters are dead. Thus, no matter how long they remain together, neither partner actually experiences the reality of a literal “lifelong love.” Rather, their relationship is experienced and sustained by the fantasy of a life the actualization of which will never be experienced or assumed (since both lover and beloved will be dead).

On the other hand, Žižek also argues that the analyst must double this deprivation. The analyst must help patients acknowledge this originary state of deprivation, that the appearance that sustains their lives—whether it be a marriage, family, dream job, or hope for an afterlife—has “never” been and will never be “consciously experience[d]” or “assume[d].” The analyst must bring the patient to the point of recognizing that the fantasy that he has presumed to be his very own has always already been the desire of another—of the Other—the imposition, in other words, of an action projected on a screen, action in which the subject has no part. “Phenomena arise,” Žižek writes, “that are not phenomena of a subject, appearing to a subject” (54). I desire lifelong love. I think I might experience lifelong love, but it is really a phenomenon playing out on a screen radically separated from me. “For Lacan,” Žižek concludes, “the ultimate ethical task”—and thus the ultimate aim and task of the analyst—”is that of the true awakening: not only from sleep, but from the spell of fantasy that controls us even more when we are awake” (60). In this sense, psychoanalysis is the ethical ruin of love, hope, and happiness—all fantasies in which the I has no part.

But to what am I awakening when I learn to see the appearances that sustain me not as private inner experiences but as the spell of the Other? I’m not sure Lacan or Žižek ever answers this question. Perhaps Lacan tries to answer in his seminars (I’ll be working through Anxiety soon).

Žižek’s efforts to disturb his readers with the “bitter lesson[s]” of Lacanian psychoanalysis bring to mind Gilles Deleuze’s disquieting preface to Difference and Repetition. He writes,

The task of modern philosophy is to overcome the alternatives temporal/non-temporal, historical/eternal and particular/universal. Following Nietzsche we discover, as more profound than time and eternity, the untimely: philosophy is neither philosophy of history, nor a philosophy of the eternal, but untimely, always and only untimely—that is to say, ‘acting counter to our time and thereby acting on our time and, let us hope, for the benefit of a time to come’ [Untimely Meditations 60, Cambridge UP]. Following Samuel Butler, we discover Erewhon, signifying at once the originary ‘nowhere’ and the displaced, disguised, modified and always re-created ‘here-and-now’. Neither empirical particularities nor abstract universals: a Cogito for a dissolved self. We believe in a world in which individuations are impersonal, and singularities are pre-individual: the splendour of the pronoun ‘one’—whence the science-fiction aspect [of philosophy], which necessarily derives from this Erewhon. What this book should therefore have made apparent is the advent of a coherence which is no more our own, that of mankind, than that of God or the world. In this sense, it should have been an apocalyptic book (the third time in the series of times). (xx-xxi) 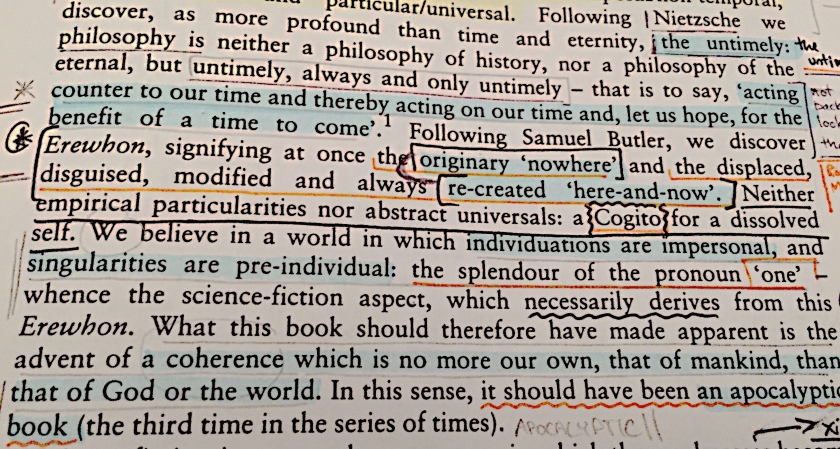 (Note: I reference part of this passage in a post on Elizabeth Grosz here.) Deleuze’s statement of belief initially seems even more disconcerting than Žižek’s/Lacan’s, no? From the perspective of DR and its preface, post-Freudian psychoanalysis, despite its insistence on presenting harsh and bitter truths about how little we control our desire and our being, remains obsessively  ego-centric, wringing its hands over how naive we all are for believing, as Žižek puts it, “the standard notion of the subject who directly experiences himself via his inner states” (54). Žižek and Lacan might insist on a multiplicity of radical separations between the subject and its fantasies or desires and even proliferate projections and reflections and screens, but the subject is still the primary concern. No matter how empty it gets, no matter how many times the profound truth what I am is deferred to the field of the Other, the question is still: what about me? Que me vaut-Il?

Things are not just bleak in DR, it would seem, as they are in How to Read Lacan. DR “should have been an apocalyptic book,” Deleuze writes, since it decenters a good deal more than the subject from the cockpit of ideation and desire. Moreover, it decenters God and Nature. To do metaphysics, one need not make the self, God, or Nature the center, viewpoint, or engine of one’s thought or feeling. The “coherence” Deleuze means to conceptualize is the coherence of fields (not just a single field), many of which have nothing to do with the (de)individualization of a person, nothing to do with the establishment of universals (“the ultimate ethical task is that of…” [Žižek 60]). The coherence Deleuze wants to write about, think about, and feel his way through is not only nonsubjective. It is nonhuman, nonworldly, and nontheistic. What about me, my God, my world? Que me vaut-Il?

And yet, somehow, despite the cosmic indifference that reigns throughout Deleuze’s work, this apocalyptic book—Difference and Repetition—lays the groundwork of later collaborations with Félix Guattari, many of which polemically oppose the damage of analysts in pursuit of the Signifier. For Žižek, “the impersonal ‘one'” is “the virtual big Other” (11) that serves as “[t]he symbolic order, society’s unwritten constitution, [. . .] the second nature of every speaking being” (8). This leads the pursuit of desire through language games, halls of mirrors, drawers of locked boxes, and frustrating and frustrated arguments over the meaning of this or that, the signification of this letter for that unconscious one. For Deleuze, the “one” is a speculated creature, built from collage. It is neither the symbolic order nor “a Cogito for a dissolved self” (xxi). It does not rule. It does not determine. It possibilizes. The Deleuzian “one” is akin to the character, landscape, or history of a science-fiction novel; its readers might recognize things in its world, but it need not reflect the readers’ world (or the world as readers fantasize it). The Deleuzian “one” is a bundle of individuations and singularities free from transcendental, a priori forms as well as “the process of collective practice” that purportedly generates the mass tyranny of the “Symbolic” (Žižek 15).

DR might ask us to give up certain fights, to accept that all of this (look around, look outside) is not for us, not about us. But it also doesn’t seek to intensify our anxiety, angst, and worry over this loss. Because it isn’t a loss. There is no deprivation here. Rather, DR promotes a perverse sort of freedom that does not belong to individual subjects (who remains small, vulnerable to encounters that force them to feel and think and slip beside themselves). Indeed, this apocalyptic book promotes a freedom from the myths of enlightenment as well an impersonal joy and creative power. Stuck in psychoanalytical frameworks, Žižek cynically and cruelly refuses to see examples of joy as anything other than good illustrations of how ideology functions today or how no one (except him, except analysts, except the enlightened?) truly knows what he or she wants (since desire belongs to the Other). True psychoanalysis, true Hegelianism, true Marxism—according to Žižek—still want us to wake up, but DR seems to want something else. Perhaps it wants us to accept that dreaming might be all we have—fabrication, creation, critique, collage—and that that might be a good thing.