Though I haven’t completed the project that has kept me from my slow readings for a few weeks, I need to work on Three Guineas at least a little bit today (and maybe Difference and Repetition next week). So, first, a reminder of where I left off last time: “Therefore let us make the attempt [to respond to your letter]; even if it is doomed to failure” (TG 5). But how does one proceed from here? How respond to the question of preventing war when it is impossible to respond, when one knows one will be misunderstood?

With a sketch, of course:

In the first place let us draw what all letter-writers instinctively draw, a sketch of the person to whom the letter is addressed. Without someone warm and breathing on the other side of the page, letters are worthless. You, then, who ask the question, are a little grey on the temples, the hair is no longer thick on the top of your head. You have reached the middle years of life not without effort, at the Bar; but on the whole your journey has been prosperous. There is nothing parched, mean or dissatisfied in your expression. And without wishing to flatter you, your prosperity—wife, children, house—has been deserved. You have never sunk into the contented apathy of middle life, for, as your letter from an office in the heart of London shows, instead of turning on your pillow and prodding your pigs, pruning your pear trees—you have a few acres in Norfolk—you are writing letters, attending meetings, presiding over this and that, asking questions, with the sound of the guns in your ears. (5-6) 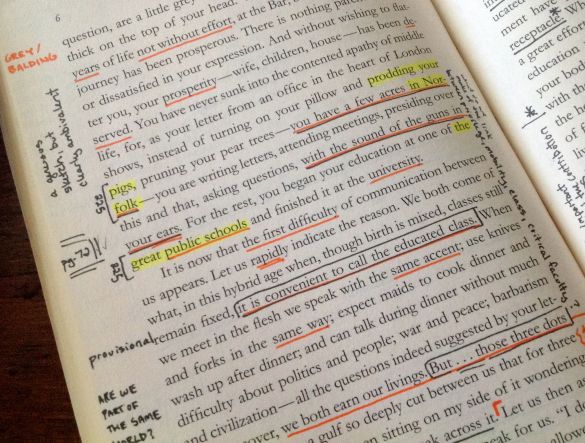 What do I notice here? First, an irony: each “letter-writer[]” does not “instinctively [. . .] sketch [. . .] the person to whom [his or her] letter is addressed.” If we speculate that Woolf’s persona is answering an anonymous mass mailing, for instance, then it follows that her interlocutor has not sketched the persona, has not anticipated the long response in the pages to come. (It would have been impossible for him to do so.) If we learn how to read Woolf’s use of the word “instinct” in this and other texts, we might also see that, for her, it does not refer to a natural or essential capacity. It may be tied to the body and the evolution of its forms, but she often uses it to refer to cultural formations and legacies that have come to feel natural or essential but that can, through effortful mental and physical labor, be reshaped, deformed, broken open, or made to serve other purposes. (I think, for instance, of “Thoughts on Peace in an Air Raid” [1940].) The instinct of sketching the person to whom a letter is addressed, for instance, requires a training of the imagination, a developed reflex of picturing the Other through what Gayatri Chakravorty Spivak calls “an epistemological performance”—precisely the practice that those in the dominant positions of power relations have so much difficulty and so little interest in learning, enacting, or recognizing. By claiming that letters which fail to picture their addressee “are worthless,” Woolf/her persona indirectly upbraids her interlocutor, who sent this very sort of letter, and a culture which has never “asked a woman how in her opinion war can be prevented” and probably still does not want to hear her answer (5).

This leads to a second observation: the trace of mild ethical ridicule in this sketch. I have always found this sketch instructive as an admonition against self-congratulatory critical pacifism or activism. Do not pat yourself too eagerly on your own back; do not smile too much at  your own persistence or tirelessness; do not puff up too largely at the thought of your own prosperity (no matter how deserved); do not judge the rightness of your attentions too self-aggrandizingly. Why? Though Woolf is a bit more explicit later in Three Guineas, one senses an implicit answer in that parenthetical phrase, “you have a few acres in Norfolk” (6). Positioned awkwardly between what our gentleman does not do (“prodding [his] pigs, pruning [his] pear trees”) and what he has chosen to do (“writing letters, attending meetings, presiding over this and that, asking questions”), this seemingly unnecessary addendum to the sketch (why such a specific speculation? why “Norfolk”? why “pigs” and “pear trees”?) reminds the persona, the addressee, and the reader alike of a background of cultural, sexual, and economic privilege that will be important to keep in mind throughout the text. Despite being in the thick of a mental fight in London, this imagined addressee has recourse—should he decide—to rest and retirement. Should he choose, he has ready-at-hand a line of escape from the mental fight and also (given his age) from a physical one as well. Do all Londerers have such recourse? All English? All Europeans? All peoples? For whom is rest and retirement not an option? We will return to these questions.

Third, despite this mild ridicule, there is also a kindness or graciousness to this sketch, for it does not deny that these rewards are unearned. It refrains from painting the portrait of an enemy (though many have read TG this way). For all its incisive irony, the persona seems sincere that the “expression” of the addressee exhibits “nothing parched, mean or dissatisifed.” One still senses an implicit critique of privilege here, but Woolf/her persona also takes advantage of the initial anonymity of the addressee in order to shape an ideal interlocutor: one eager to discuss the possibilities of peace, who has not yet given up the mental fight for that retirement and rest which awaits him as well as his “wife [and] children” (6). This is the portrait of an earnest, educated, sympathetic creature who, despite great privilege and because of great privilege, has worked and reaped rewards and who, at a time when he could retire or simply vacation from his efforts if and when he chose to, continues to work among threatening, deafening, and baffling conditions—though he does so, of course, from a position of relative safety. He is not among the guns, though he still struggles to think, concentrate, and discuss the prevention of war with the “sound of [them] in [his] ears.” (“Thoughts on Peace in an Air Raid,” which I mention above, offers a much different take on matters of safety and danger in the mental fight of civilians against war and for peace.)

Fourth, in sketching out this portrait of an ideal addressee, Woolf simultaneously sketches our roles as readers. We are to play the part of this successful man—a middle-aged husband and father, a landowner, a prosperous civilian preoccupied with the prevention of war—but we are also, it seems, meant to play the part of an accomplice looking over the shoulder of Woolf’s persona as she writes this letter. In learning to play both parts, we learn to enjoy the use and to feel the sting of the passage’s irony simultaneously, to become fellow workers in Woolf’s own mental fight for peace all the while occupying the position of her target as well. Doubling ourselves  is crucial for reading this text, following its argument, and feeling its insights and indictments directly (or so I argue). It also prepares us to sense how often Three Guineas puts itself under critique.

Fifth, this is a sketch not just of a person or a type but also, in W.J.T. Mitchell’s words, of “the force field and face of desire” (What Do Pictures Want? 57). We can ask interpretively and rhetorically what this sketch means and does, but what does this picture want? Why does it wish to prevent war? What does it lack? What does it want to secure? A future for its prosperity (“wife, children, home”)? A peace that will ensure that things as they are will continue on as they are? Continuity? Conservation? Once we begin to ask what this picture wants and why Woolf/her persona chooses this portrait as that of her addressee, we might begin to learn to feel how radical Three Guineas actually is. It may be a book  in the service of a peace to come, but it is not in service of the peace that her interlocutor imagines, not the security, and not the future he lacks and desires for his family, legacy, city, and country. In the very last sentence Woolf’s persona makes one last stroke with her verbal brush that releases the flood of the critique to come, that destabilizes that word “peace,” and that will begin to articulate an alternative arrangement of desire, a new picture that wants something other than “things as they are” (Stevens). “For the rest,” she concludes her paragraph, “you began your education at one of the great public schools and finished it at the university” (6). This seemingly innocuous observation, almost an afterthought and certainly a given (considering the rest of the portrait), will become the persona’s point of departure for asking, What is it we want to secure? What is it that we want to envelope in peace? What sort of war is it against which we launch our mental fight? And who is this “we”? Do you and I—educated man and daughter of educated man—want the same thing? Are we a “we”?

“It is now,” with the mention of education, “that the first difficulty of communication between us appears.” Reading on . . .